Who is Eligible for an ORPP?

The Government of Ontario’s planned pension plan, which is slated to come into effect in 2017, will increase the retirement incomes for 3 million plus Ontarians. The Ontario Retirement Pension Plan (ORPP) will also, however, exclude millions of workers in the province. 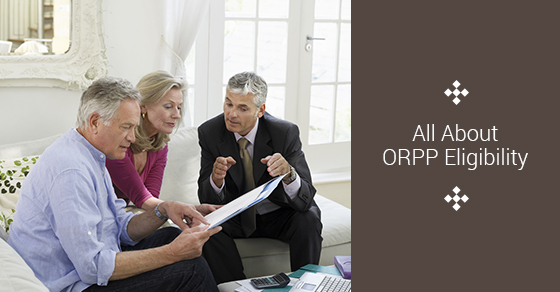 Billed as a way to supplement what retirees will already receive under the Canada Pension Plan (CPP) when they reach retirement age, the ORPP is a response to what the provincial government says is a crisis situation where too many cash-strapped Ontarians are forced to accept lower standards of living than they did during their working years.

If you’ve been wondering about whether or not the ORPP applies to you, read on for more details.

You’ve no doubt heard about the ORPP that the ruling Liberal Party of Ontario announced as part of its provincial budget last year. One thing you ought to know is that, unlike the CPP, the ORPP will not apply to all Ontarians. For one thing, it will be applicable to roughly 50% of the province’s workforce of around 6 million persons. You won’t be covered if you’re self-employed, are employed at a business that offers a pension plan that exempts participation, or are working in a federally regulated industry like telecommunications, banking or transportation.

How Much Will Workers Have to Contribute?

If you qualify for the ORPP, you will have to contribute 1.9% of what you make — up to an income maximum of $90,000 — and this amount will be matched by your employer. The goal is to have the ORPP pay out – after you retire — around 15% of the income you made while you were in the workforce.

If you earn a salary of $70,000 annually, you will contribute around $3.46 for every day you work, and this amount will, as mentioned above, be equalled by your employer. If you retire after having contributed to the OPP based on a yearly salary of some $70,000, you can expect retirement benefits for $9,970 annually for the rest of your life. Of course, the actual amount will depend of factors such as how many years you contributed to the ORPP.

The ORPP will definitely provide some much needed income for Ontarians during their retirement years. With the aforementioned information, you can determine, one, if the ORPP applies to you and, two, how much you will have to contribute.